In early March 2018, the twins (now in their 70s) received news about the BBC interview and when they watched it, the photographs, information, all matched up. Both of them realised they shared the same Father with Anthony, but the twins John and David Perry had no knowledge of their father’s other son.

After a couple of calls, John and Perry decided to visit Anthony in Hong Kong, and on March 20th 2018, the long lost half-brothers finally reunited! Check out the emotional video on the next page! 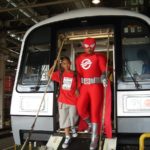